The Everyman and Graffiti present an on-demand audio stream throughout May and in June via the NASC Theatre network as part of Lasta, a festival curated by young people by the Pavillion theatre, of  THIS GIRL LAUGHS, THIS GIRL CRIES, THIS GIRL DOES NOTHING by Finegan Kruckemeyer.

Triplet sisters are left in the forest by their woodcutter father. From this fairytale beginning, three resolutions are made – one sister will walk one way, one the other, and the third will stay right where she is. Twenty years later, having circumnavigated the globe, and fought vikings, and crossed oceans, and tamed wilds, and achieved greatness, the three meet again, as women.

Age Recommendation: 8+, recommended for young audiences and their families.

To accompany the audio series of This Girl Laughs, This Girl Cries, This Girl Does Nothing by Finegan Kruckemeyer, our creative learning team have created a free, fun and accessible downloadable digital resource pack is available below  for teachers and carers. In it, you will find a special series of fun, creative prompts for teachers, parents, and carers of children. These activities support the listeners’ enjoyment of the episodes and enable a deeper engagement with the audio story.

Each of the five audio episodes is accompanied by a set of activities that include:

·A creative writing prompt or task

Each set of fun, interactive activities aim to help teachers, parents, or carers to further explore the themes and characters in each episode.

Prompts are easy to follow with clear instructions. The art prompt clearly outlines any materials required. You will need very few materials, and there are opportunities for make and do. You can use whatever you have in your art and craft supplies. Paper for drawing, some colouring supplies (paint, colouring pencils, or crayons), cardboard, lollipop sticks and lots of imagination

Each activity is a standalone exercise to accompany each episode and can be adjusted to be as long or as short as class time allows.

We hope you will enjoy bringing the adventures, and wild and wonderful worlds of Albienne, Beatrix and Carmen,further into your classroom or home.

Finegan has had 97 commissioned plays performed on six continents and translated into eight languages. He has received 37 awards (at least one each year since 2002) including the 2017 Mickey Miners Lifetime Achievement Award for services to international theatre for young audiences, the 2015 David Williamson Award for Excellence in Australian Playwrighting, and an inaugural Sidney Myer Creative Fellowship.

Finegan was born in Ireland and moved halfway around the world to Adelaide, Australia aged eight. After 15 years, he and his wife Essie left for the island state of Tasmania. And after 15 more, with their son Moe, they returned.

He is committed to making strong and respectful work for children, which acknowledges them as astute audience members outside the play, and worthy subjects within.

This Girl… the Audio series: The Creative Team

Presented by The Everyman and Graffiti Theatre Company

With heartfelt thanks to ongoing support and funding to make this production possible from the Arts Council of Ireland and to our presentation partners, The Everyman

← Do you know an 8-10 year old who would like to try out Activate Youth Theatre? Come and see our Gifts to Cork for Cruinniú na nÓg and be part of the art → 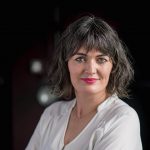 Responsible for the day to day running of the good ship Graffiti, Lynn works across finance, fundraising, communications, human resource and governance, and has a deep, sometimes worrying, adoration for colour-coded spreadsheets.